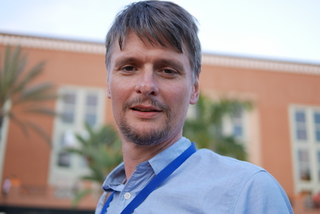 There are some bios below, for other public bio information you can check ORCID or this profile in the Cambridge Alumni Magazine, this one in Johnian Magazine or Wikipedia. Note that to avoid conflict-of-interest editing I did not create and I do not edit the Wikipedia page.

Neil Lawrence is the inaugural DeepMind Professor of Machine Learning at the University of Cambridge. He has been working on machine learning models for over 20 years. He recently returned to academia after three years as Director of Machine Learning at Amazon. His main interest is the interaction of machine learning with the physical world. This interest was triggered by deploying machine learning in the African context, where ‘end-to-end’ solutions are normally required. This has inspired new research directions at the interface of machine learning and systems research, this work is funded by a Senior AI Fellowship from the Alan Turing Institute. Neil is also visiting Professor at the University of Sheffield and the co-host of Talking Machines.

As well as his technical expertise, he is actively involved in supporting policy work in data, machine learning and artificial intelligence through serving on working groups with the Royal Society, working with the Centre for Science and Policy, serving on the UK’s AI Council and co-convening the Royal Society’s DELVE group for a multidisciplinary Covid-19 response.

Neil Lawrence is the DeepMind Professor of Machine Learning at the University of Cambridge in the Department of Computer Science and Technology where he also leads the Accelerate Programme for Scientific Discovery. He has a Senior AI Fellowship from the Alan Turing Institute. He is co-host of “Talking Machines” podcast and a Visiting Professor at the University of Sheffield.

These research challenges are heavily inspired by the deployment of machine learning solutions in the African context, in particular through Data Science Africa.

Neil was Associate Editor in Chief for IEEE Transactions on Pattern Analysis and Machine Intelligence (from 2011-2013) and is an Action Editor for the Journal of Machine Learning Research. He was the founding editor of the Proceedings of Machine Learning Research (2006) and is currently series editor. He was an area chair for the NIPS conference in 2005, 2006, 2012 and 2013, Workshops Chair in 2010 and Tutorials Chair in 2013. He was General Chair of AISTATS in 2010 and AISTATS Programme Chair in 2012. He was Program Chair of NIPS in 2014 and was General Chair for 2015. He is one of the founders of the Gaussian Process Summer School, the DALI Meeting and Data Science Africa and is a member of the UK’s AI Council.