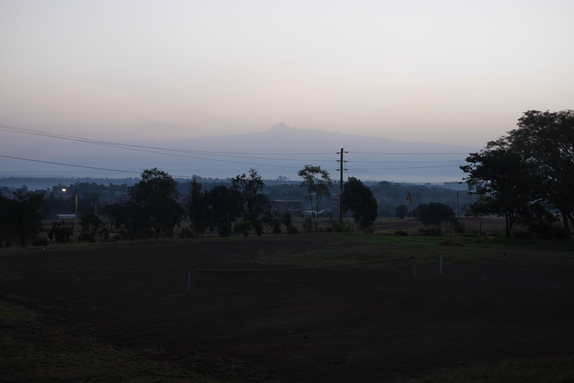 The mountain is out. The 5000 meter Mt Kenya in the Distance

John Quinn has been working for nearly a decade at Makerere University in Kampala, Uganda. He’s been bringing imagination and ingenuity to a range of challenges. Today the workshop get’s serious because he brings his experience of tackling these challenges to the school.

John has a patient style of presentation that brings a great deal of clarity to the material. He builds up the methods slowly, encouraging the students to design them as the lecture progresses. It was a great pleasure to watch. Learning in this way surely leads to fundamental understandings that won’t be lost and will likely inspire some of these students to make some serious contributions in this domain.

John introduced the domain of classification with a range of examples in his first session, eliciting algorithms from the students on how digit classification might be performed. As with me they were a little reluctant at first, but once they got going they were full of ideas.

For his second session John brought in the example of Malaria parasite classification from his ‘lab on a phone’ project. John’s talk was a master class in how to get students functional in data science. This body has not worked on machine learning methods before, these concepts are unfamiliar. Watching him talk reminded me why it was so important to have him there. This was machine learning on the ground, how it’s applied to solve real challenges. I learn more from John every time I see him speak, both about how to teach, and how to address real data challenges.

In yesterday’s post, I emphasised adaptability. Once again this was proven. We hadn’t been sure how far through the students would get or which parts of the material would chime with them, so we agreed we would address the lab session having seen how the morning progressed. This left Mike Smith with the task of cobbling a lab together in about 15 minutes. One which would show a range of classification methods on both digits and the malaria classification example. This without no guarantees of the bandwidth needed for students to access the material. Once again Mike delivered, and whilst Andreas began preparing his dimensionality reduction slides, inspired by John’s approach, the lab class got underway.

At some point Ciira and I retired to the coffee room to discuss progress, research, Nyeri and drink DeKUT coffee. The room is in a round tower, with a 270 degree view of campus. In the centre, on a clear day, would stand Mount Kenya, which despite being 100 kilometers away still takes up a good 50 degrees of the viewing space. We were joined by David, who manages the conservancy here. Tomorrow he will take us for a dawn walk to see the wildlife. David has been working in the Kenya national park service since the early 1990s. You could hear the passion in his voice when he spoke about the bird-life here. Ciira and David both share a passion for this and better understanding of herbal medicines. Although as is so common, they hadn’t actually spoken about it in detail before. Given time in his busy schedule, it’s clear Ciira has the opporunity for several interesting collaborations. I’m glad the workshop is seeding these ideas. I hope for more of the same when the summer school portion ends and the other speakers arrive for the workshop-proper.

We also talked of Dedan Kimathi and the Mau Mau rebellion. How important the forest was to the rebels, and how through a combination of factors this local portion (over 100 acres which is part of the DeKUT campus) was preserved. Kimathi was captured and killed by the British. There were many concentration camps locally and prisoners were tortured. Although both David and Ciira were too polite to bring this up. In the campus there is a Hero’s garden, David said when they evenutally find where he is buried, they will place a plaque on one of the stones there.

Later we were joined by John and Mike we were able to have a more ranging discussion on collaborations (while Andreas got on with his slides). We talked about the role of the UN Pulse Lab and the wider perspective for Data Science in Africa. A couple of collaborations with strong potential between John and Ciira also emerged.