Our Helen is “artificial intelligence”. The face that launched a thousand companies.

In Greek legend each god had his or her favorite hero and they meddled in the heroes’ affairs for their own amusement. These machinations were beyond the imaginings of the poor earthbound heroes, but it was the heroes that dealt with the consequences.

Of course the gods are fickle, and soon their attention may be turned to other affairs of the mighty, but just while we have their attention let’s just update ourselves with the state of play on the battlefield of Troy. Who do our modern actors play in our modern tragicomic drama of the Trojan Wars?

Is the people of Troy, championed by Hector. Helen is rightfully theirs, it was an Olympian stitch up from the outset. Aphrodite gave her to Paris, Hector’s brother.

Deep learning is the horse that the Greeks cleverly fill with their heroes and wait for it to be taken inside the gates of Troy. Naively welcomed by the people of Troy as they believe it to be an omen of the durability of the city. In practice the Greeks run out and start slaughtering everyone.

Symbolic logic is Paris. Good looking fellow who was promised the hand of Helen before he’d even met her. The deal was done in exchange for an apple. Not particularly effective in battle, but gets off quite a lucky shot at some point. Is easily defeated by Menelaus in a one on one fight. Eventually killed by Philoctetes’s bow.

Google as Menelaus, the husband of Helen. The marriage between Helen and Menelaus was what triggered all the attention in the first place. Everyone in Greek society wanted her, but after much deliberation and debate she was betrothed to Menelaus. To prevent trouble, the Greeks agreed a pact among themselves to defend the marriage. Unknown to Menelaus though, Helen had already been given to Paris by Aphrodite some time before (who had swapped her for an apple).

Microsoft as Agamemnon, the elder statesmen of the Greeks, perhaps not as in touch with modern Greek thinking as some others, but he commands enormous respect and still has many qualities. Some family history with the gods which complicates things for him.

Facebook as Odysseus. He hid away when the initial call to arms was made, but once he realized the inevitability of the battle he joined in with vigor. Fundamentally he doesn’t care so much about Helen. Cunning. Keen on his wife Penelope, who’s back in Ithaca. There’s also more story to come from this one.

Apple as Achilles, good looking, very fine hardware, and favored by the gods. However, he’s spent a large part of the battle so far sulking in his tent (he has a history with Agamemnon), may well be stirred to emerge at a critical moment to try and claim the plaudits.

Amazon as Philoctetes, left behind early on because he had a smelly foot, but turns up late on to play a critical role when everyone realises that he’s the one with access to the hardware they need to kill Paris.

The “deep learning conspiracy” is Cassandra. Cassandra told the truth but people were doomed not to believe her. In a special twist for our story, Cassandra gets a big one right, and after that everyone believes everything she says. 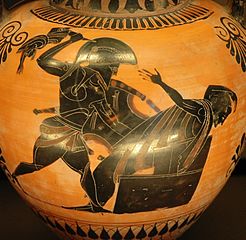 Neoptolemus (literally “New Warrior”) is OpenAI. Turns up at the end, is very young, a teenager at most. Favored by the gods because of his progeny. His nature is unclear, depending on what source you read he is either depicted as brutal or kindly.

Baidu as Aeneas, the Greek ideas of freedom and democracy are all very well, but there’s nothing quite like well organized empire for dominating the Mediterranean. Aeneas was a Trojan minor hero who went off to found the city of Rome.

IBM as Hercules, did some really good work in the past, including carrying the heavens on shoulders, killing some bothersome beasts and a lot of stable cleaning. Held in great respect by all the current combatants, but he’s not actually present at Troy. In a nice twist though, he will turn up again later in spirit form, along with Agamemnon, to give some advice to Odysseus.

While the Trojan wars are widely written about, and even studied at schools, the story focuses on a group of misogynistic men, with fragile egos who, fall out over perceived slights and are chasing seductive goals of little true worth.

Meanwhile, back in wider Greek society, who knows what Pythagorous is up to? The aspects of the Greeks we value today: democracy, science and mathematics, get very little mention in their tales of heroes. While a battle raged around Troy, one wonders if the real story was what all the more sensible Greeks were getting up to. Maybe the wider Greek world is those people in machine learning and related communities who are simply driving forward with tangible useful goals on elegant problems of practical interest, just like we always did before our heads were all turned by Helen.